The debate on putting Uganda gorilla permits was back in the media last month in which Uganda wildlife Authority Executive Director Dr Andrew Seguya was cited blaming the Minister of Tourism for causing the delay of operationalization. While addressing Members of the Uganda Parliament in Queen Elizabeth national Park, the executive director blamed the minister for suspending putting gorilla permits online pending investigations. He said that because of this, Uganda Wildlife Authority has lost of 20 billion shillings in unsold gorilla permits. He further mentioned that tourists don’t know where to find gorilla permits and that he wanted to break the monopoly of Uganda Tour Operators who often charge a price more than that of Uganda Wildlife Authority.

The Minister of Tourism, Hon. Dr. Maria Mutagamba has made this directive in a letter dated 13th,March,2014 and titled “Operationalization of the online gorilla pemits” which she has addressed to the UWA E.D, Chairman AUTO and Chairman UTA.

The squabble between the Association of Uganda Tour Operators (Auto) and Uganda Wildlife Authority began at the AUTO AGM in July 2013. Tour operators were concerned that putting gorilla trekking permits online for booking could put them out of business because it exposes them to international competition, where foreign travel companies could directly buy gorilla permits from UWA instead of going through them.

This good news as a result of the tireless efforts of the Executive of AUTO and its entire membership demand that all tour operators in Uganda heave a sigh of relief and pray that there is no turn of events. 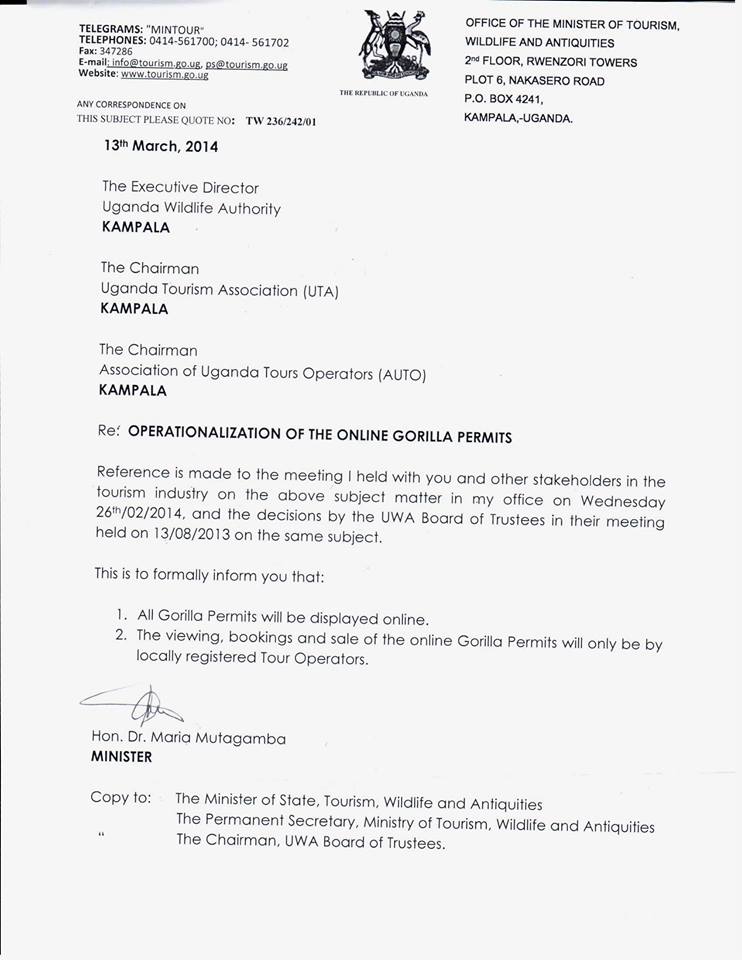