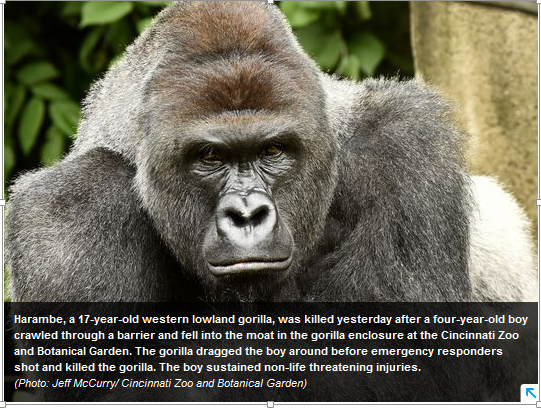 Harambe was a 17years old 400pound gorilla in Cincannati zoo and botanical garden found in the state of Ohio, United States. The boy got in contact with the male gorilla by climbing through a barrier around the gorilla enclosure and fell in a shallow moat about 12feet. The gorilla initially seemed to be protective of the boy but must have been disrupted by the screaming. Videos posted on social media show Harambe dragging the boy through the moat before disappearing from the view.

This all happened on this weekend at around 4:00pm. A lady who tried to stop the boy says she tried to grab him but failed, she then started yelling at him to come back, this is when people started screaming. The boy was between the gorilla’s legs when it was shot. The director of the zoo stated that they chose to shoot the gorilla dead to protect the little boy, if they tranquilized it, it would have a dramatic response that could harm or even kill the boy. The area was cleared by the zoo staff. The boy was then rushed to Cincannati children’s hospital.

The family of the boy reported that he is much better now, despite the injuries he acquired. Plans were made for a memorial vigil at the zoo from noon to 2:00pm yesterday. Many critics blamed the parents of the boy and went ahead to make groups and campaigns on social media to press charges on the boy’s parents, the police declined this suggestion.