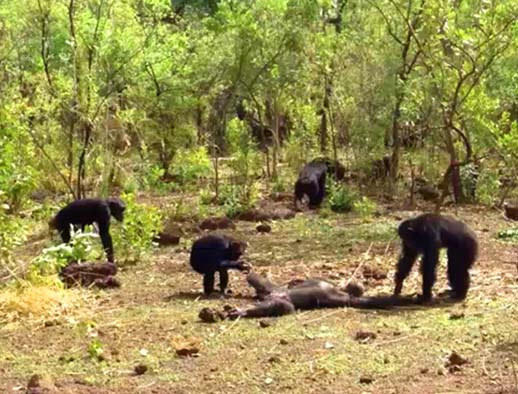 Chimpanzees are the closest animals to man, also known as our cousins. Chimps and humans are believed to share the same ancestors that lived four – eight million years ago, thus share more than 98% of our DNA. They live in social communities of various animals. They easily adapt and live in the African rain-forests, woodlands and grasslands. They have a varied diet that consists of fruits, plants, meat and other unknown foods.

Researchers have been observing a chimpanzee group in Senegal since the year 2005. They identified Foudouko as the alpha leader by 2007. He led more than 30 western chimpanzees in Fongoli, this was about 10 square miles of savanna in the southeastern Senegal. Two years later, he was overthrown by a group of young males. Having fallen from power, he lived on the outskirts of the group for years as he attempted to return in mid-2013. He was then killed brutally by members of the community that he used to lead. This was a rare incident for chimpanzees to kill one that was of their own community.

The researchers found out that at every chimpanzee site that has been studied for more than a decade has conflicts that end in death. However, Foudouko was one of the victims of these conflicts. His body was beaten, bloodied and partially cannibalized. This was shown in a video and also the aftermath of the gruesome scene is shown. This showed that chimpanzees are not strangers to mortal violence.

The chimpanzee communities are led by the alpha males and coalitions of male allies, followed by the females and the young ones. When the females reach sexual maturity, they tend to go to new groups and for the male, they stay in their birth communities and strive for social dominance.