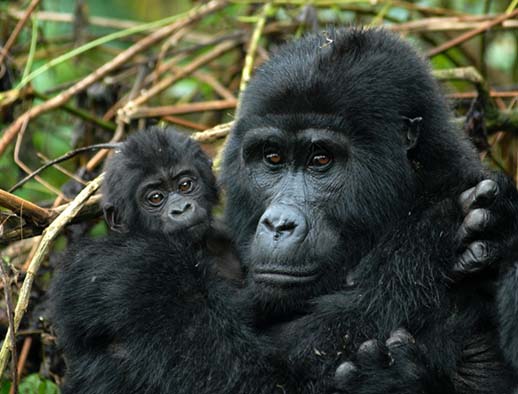 Mubare group of Mountain gorillas in Bwindi Impenetrable National Park was blessed with two bouncing baby gorillas born in one week last month. These were both conceived in a one week interval, the news brought excitement to the wildlife community. The executive director of Uganda Wildlife Authority (UWA) Mr. Andrew Seguya reported that Gorillas are among the rarest species of animals in the whole world and it is not common for them to be born in the same week, he also emphasised that they are regarded as critically endangered animals.

On the 23rd of June, Karungi produced one of the celebrated baby gorillas then Kisho produced 5 days later that is on 28th of June. The two female members of Mubare group added to it to make now 14 mountain Gorilllas of the group. The father to the new borns is Kanyonyi, the silver back in the group. He took over leadership from his father after his death in around 2012 and since then the number of members in Mubare group has been increasing.

Since the beginning of the year, Bwindi and Mgahinga National Parks have recorded 10 births of gorillas and only one death. The Conservation Area Manager for Bwindi and Mgahinga, Pontious Ezuma reports that the gorillas are producing as a result of better conservation measures. They are more relaxed and they feel safe to produce babies.

For about three years, since 2014, Uganda’s tourism sector has topped the foreign exchange earnings ahead of foreign remittances and coffee. Gorillas contributing about $10m (shs.34b) to Uganda’s tourism earnings.