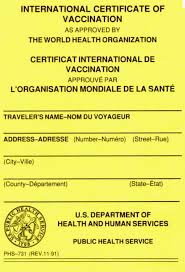 posts like Malaba,Mpondwe,Cyanika,Mutukula among others to have yellow fever vaccinations and carry their certificates if they plan to travel to the Pearl of Africa-Uganda.

Dr. Sekajugo James the principal medical officer at the Ministry of health in Uganda stated that the country is on high alert and risk after the disease killed one person in Kenya. He further said that there is a high Yellow fever out break in Angola and the disease has claimed over 200 people. Another reported out break was reported in the DRC which is believed to have killed eight persons. Dr. James also added that they had two cases of 2,Kenyans who traveled from Angola where they tested positive and one lost a life while the colleague is still under medical attention.

Dr. James Sekajugo further outlined that the disease spreads fast with air transport and that all visitors traveling to Uganda from the high risk countries should carry their Yellow fever certificates which should given to any traveler at least 10-days before traveling.

The card requirement is meant to ensure passengers are protected from contracting and spreading the disease.
“We are working with the Civil Aviation Authority (CAA) to ensure that passengers who appear without the cards receive the yellow fever vaccine at the airport on their costs upon arrival,” he added.

All airlines flying into Entebbe International Airport have been asked to ensure that their passengers from high risk countries have the certificate before being issued with an air ticket.