Lake Bunyonyi also known as the place of many little birds is believed to be the second deepest lake in Africa with its deepest end approximately 900m. The lake is also 24 kilometre long and 7km wide covering an area of 61 square kilometres.

The term Bunyonyi translates to ”many small / little birds” and this due to the several bird species at this lake. The most prominent of these include herons, weaverbirds, the grey crowned cranes, and many more. Lake Bunyonyi is located in South-Western part of Uganda between Kisoro and Kabale close to the border with Rwanda.

Lake Bunyonyi is dotted with 29 Islands. The most prominent of theses include: The Akampene Island also known as the punishment island, it is believed that at this Island the Bakiga people used to leave girls that got pregnant before marriage so that they would die of hunger or drown if they tried to swim back as a way of punishing them. These girls would be rescued by poor men who did not have bride price to get the girls on the mainland for marriage.

The Islands combine with the high altitude, moderate temperatures, highly terraced green lands to form fascinating scenery and an awesome experience said only to be experienced in Switzerland. The lakes waters are also free from bilharzias thus very safe for swimming, something not said about so many lakes in the region.

Accommodation in and near Lake Bunyonyi 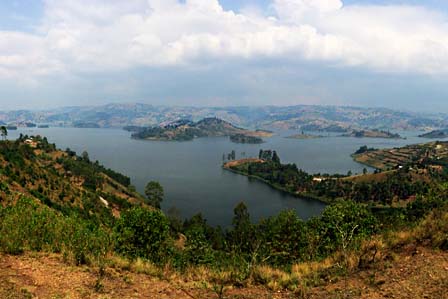