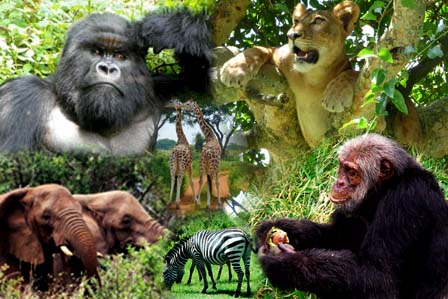 The wildlife of Uganda is composed of its flora and fauna. Uganda has 364 species of mammals and 1,062 species of birds. Each of Uganda’s national parks has its own unique combination of fauna, making it an interesting safari destination for large game viewing.

Below are some of the unique animals in Uganda:

Lions (Panthera leo), these are the largest member of the cat family and one of the Africa’s big five. They are the top predator in any African ecosystem where they live. Lions have a mane while the lioness do not.

They are among the most wanted to be seen animal while on game drive and there is always a big excitement on spotting the King of the jungle.

Giraffes (Giraffa camelorpardalis), these are the tallest animals reaching upto 18 feet in height we have in Uganda's National Parks. When startled, they can gallop at speeds up to 56mph. Since giraffes have a good sense of smell and vision, other animals like antelopes stay close to them of the fact they can see predators at a distance.

Elephants (Loxodonta africana), these are the largest living mammals on land which are found in Uganda's National Parks or game reserves. An adult African elephant is 3.5m high and weighs over 6,000kgs.

There trunks are remarkable; serves as a nose, a hand, an extra foot and a tool for gathering food or caressing a companion.

African Buffaloes (Syncerus caffer), these are a member of the ‘Big Five’ group that mostly stays in the open savannah grass lands. Buffaloes are usually calm if left alone. They like to keep in swampy areas where they flock during hot temperatures to cool off and drink some water.

Topis (Damaliscus lunatus), thse are in the family of the antelopes. They are a medium-sized antelopes with striking reddish brown to purplish-red coat that is glossy, and shiny in bright sunlight.

Antelopes, these are a wide range of species, more of them being native to Africa more than any other continent. East Africa has got 20-35 species of antelopes co-occurring over its savannahs. They can be distinguished by their size, colour, horns, and other features.

There are 29 species of them in the different National Parks and game reserves of Uganda. Among these, we have the eland, greater Kudu, Jackson's hartebeest, waterbuck, the semi-aquatic sitatunga, Grant's gazelle, the Uganda Kob, Oribi, Topi and more.

Rhinoceros (Ceratotherium simum), these are large primitive-looking mammals. Due to their poor eyesight, they sometimes charge without apparent reason. These rhinoceros have a very good sense of smelling and hearing.

They are found at the Ziwa Rhino Sanctuary in Nakasongola and at the Uganda Wildlife Education Centre.

Other animals of Uganda and where they can be found: