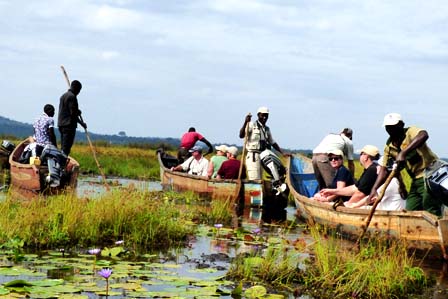 Best vacation places in Uganda or Uganda's Points of interest

Uganda, the ‘Pearl of Africa’ was widely considered Africa’s best safari holiday destination in the 1960’s, which is easy to believe as you travel to the heart of the rugged wilderness on the easy to navigate network of roads or, if you are pushed for time, taking advantage of the charter flights.

African Adventure Travellers is hereby introducing to you the famous places to visit in Uganda, thereby helping you decide on where to have your memorable trip, honeymoon vacation, holiday destination or a better vacation place for your better stay in Uganda.

Below are some of the holiday destinations in Uganda or Best places to visit in Uganda.

In this park, the Murchison Falls are the main attraction of and chimpanzees in the Budongo forest.

Being a home to the giant mountain gorillas, it’s commonly known for gorilla tracking.

Queen Elizabeth National Park is located in south western part of Uganda. It occupies an area of 764 square miles (1,978 square km) in a region of rolling plains east of Lake Edward and foothills south of the Rwenzori Mountains.

It is known for its wildlife; among the species are hippopotamuses, elephants, leopards, lions and chimpanzees. It is now a home to 95 species of mammals and over 500 species of birds. The area around Ishasha in the southern sector of the park is known for tree climbing lions.

Kibale National Park is found in western region Uganda protecting moist evergreen rain forest. The park was created in 1993 to protect a large area of forest previously managed as a logged Forest Reserve. The park is an important eco-tourism and safari destination, popular for its population of habituated chimpanzees and 12 other species of primates.

The park is commonly known for its wildlife like giraffes, buffalos, hippos, crocodiles, zebras, elands and many other antelopes.

Kidepo Valley National park is located in the North Eastern part of Uganda on the Boarder of Uganda and Sudan.

The park's game viewing is far the best with lots of game like the bush duikers, leopards, cheetahs, striped hyenas, lesser kudus, buffaloes, jackals, lots of antelopes, bush babies and lots more game, not to missed are the ostriches.

Lake Victoria is one of African great lakes which was named after Queen Elizabeth Victoria of England who was sent by reins of England. It's one of the world's largest tropical lake second to superior lake in North America.

One can have a lot of activities done and carried out along lake Vitoria for example bird watching, boat ride, fishing the large Nile perch, Tilapia and other fresh water fish.

Ziwa Rhino sanctuary is a habitat to the White Rhinos located about 175km on the Kampala Gulu Highway. The only sanctuary to one of the ‘Big Five’ mammals in Uganda. This is the best destination for those interested at rhino tracking though a few can be seen at the Uganda wildlife education centre.

Ngamba Island is situated on a 95 hectare of forested Island on Lake Victoria originated from a fishing village, which fostered to the establishment of the Ngamba Island Chimpanzee Sanctuary in 1998.

Ssese Islands comprise of 84 islands all located around Lake Victoria in the Kalangala district area in the southern central part of Uganda. Ssese Islands are with the main island of Bugala attracting many visitors because of its white sand beaches and great forestry scenary.

Lake Bunyonyi is located in south western part of Uganda between Kisoro and Kabale close to the border with Rwanda. It is believed to be the second deepest lake in Africa with its deepest end approximately 900m. The lake is 24km long and 7km wide covering an area of 61 square kilometres.

Other beautiful places to visit in Uganda